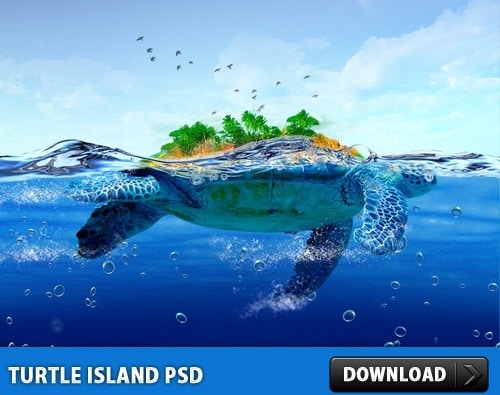 Turtles can be very mystical creatures depending on the culture portraying them. However, they are generally seen in the past as awesome creatures. They are pretty much portable islands in the middle of the sea. They have also been portrayed as such in numerous literature. Hence, the image has stuck. Unfortunately, this does not prevent them from being endangered due to the destructive activities of mankind. So make sure that people are aware that turtles do need to be saved and appreciated with the help of the Awesome Turtle Island Concept Mockup.

This mockup features a nice and awesome scene involving a turtle. The said turtle can be seen swimming and heavily illustrated to look like it is holding a mini island on its back. You can choose to change a lot of the details too. The Free Awesome Turtle Island Concept Mockup in PSD is perfect for your branding, client, designer, identity, and business needs. Download it now!