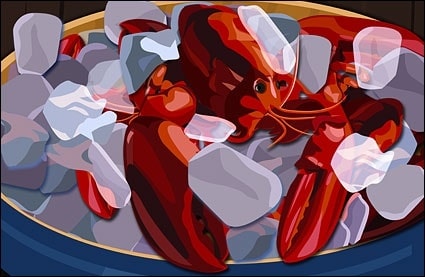 Seafood has always been regarded as one of the most nutritious diets ever. That is because the sea is teeming with healthy and dangerous creatures alike and is also less polluted than the land. When it comes to seafood, however, one of the best and most sought-after is the lobster. Pretty much like crabs but with less potential to give you a high blood pressure. So make sure that people come to appreciate lobster a lot more with the help of the Big Lobster Illustration Mockup.

This mockup features a nice and tasty scene involving a lobster. The said lobster is actually just an illustration of the real thing. It also comes along iced with a lot of ice cubes on it. You can choose to change a lot of the details of the mockup depending on your preferences. The Big Lobster Illustration Mockup is perfect for your branding, client, designer, identity, and business needs.