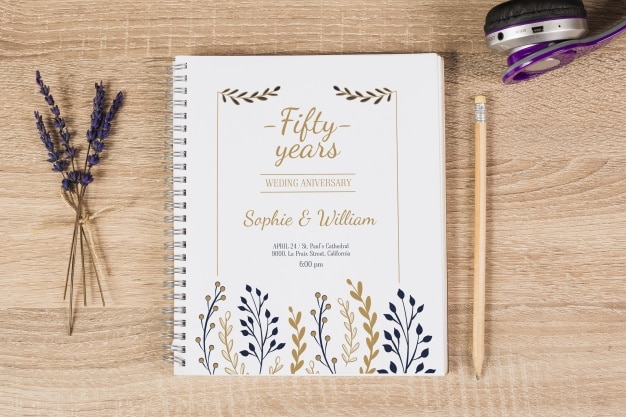 Weddings and marriages are some of the happiest and most fulfilling things ever in life. A lot of couples would even go out of their ways to make it their life goal to marry. Of course, getting married is one thing, but staying married is another entirely and can be a lot more difficult. Hence, each year of marriage should be celebrated wholeheartedly. So make sure that you know how to celebrate one of the biggest milestones of marriages with the help of the Golden Wedding Anniversary Notebook Mockup.

This mockup features a nice and celebratory design for a wedding anniversary gift. The said gift is a notebook which emphasizes the 50 years of marriage of a couple or otherwise known as the golden years. You can choose to change a lot of the details of the mockup too. The Golden Wedding Anniversary Notebook Mockup is perfect for your branding, client, designer, identity, and business needs. Download it now. It is free!