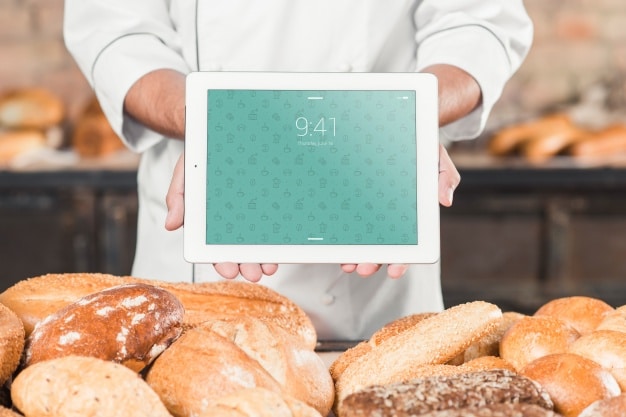 The iPad is Apples answer to people who want something that stands between a laptop and a phone. It does have the functions of the modern phone but with an expanded screen. As such, it is perfect as a replacement for a notebook. Hence, why a lot of people in the food industry use iPads as cookbooks or recipe guides. They are handy after all. So make sure that people know what utility the iPad can bring to them with the help of the iPad Bakery Scene Mockup.

This mockup features a nice and realistic scene involving a baker working on bread with the help of the iPad. The iPad itself is being held by the baker with both hands, seemingly presenting it as a valuable helper. You can choose to change a lot of the details of the mockup depending on preference. The iPad Bakery Scene Mockup is perfect for your branding, client, designer, identity, and business.