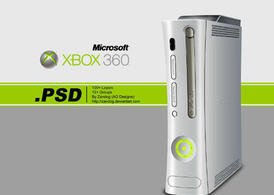 Gaming consoles are one of the most advanced and popular ways to play video games right now. They also have certainly gone a long way with a lot of technological changes and developments to keep them up to date. Along with that, they also update the quality of their games and they are becoming more and more lifelike each year. One of the best consoles around is the Xbox from Microsoft and you can make a promotion for it with the help of the Microsoft Xbox Console Mockup.

This mockup features a nice and realistic scene involving an Xbox 360 from Microsoft. The console is famous for being the fiercest competitor of the PlayStation from Sony and the two are still going at it right now. You can choose to change a lot of the details of the mockup depending on your preferences. The Microsoft Xbox Console Mockup is perfect for your branding, designer, client, identity, and business needs.