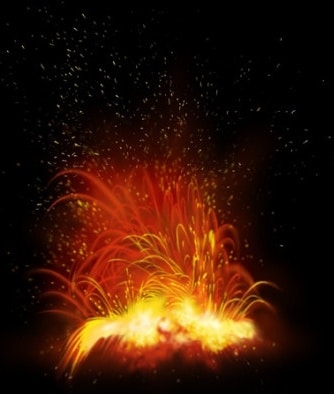 The Earth and nature both have their violent and beautiful ways of purging the surface and making it start anew. We’re talking about the destructively beautiful volcanoes which are everywhere on the planet. These things have caused the destruction of cities, lands, changes in weather, and of course, the path for new life to begin. They have been doing that to Earth since time immemorial. So make sure that people see the beauty in nature even in volcanoes with the help of the Volcanic Explosion Scene Mockup.

This mockup features a nice and explosive scene involving a volcano. The said volcano can be seen in the middle of an active peak where it is spewing out lava, fire, and smoke. You can choose to change a lot of the details of the mockup depending on your preferences. The Volcanic Explosion Scene Mockup is perfect for your branding, client, designer, identity, and business needs.